In 1940, the Second World War broke out in Western Europe. In the same year, in Tanis, Egypt, thousands of kilometres away from the theatre of war, a French archaeologist by the name of Pierre Montet made a discovery that would rival that made by Howard Carter almost 20 years before. News of this great find, however, did not create such a buzz amongst European society, due to the developing conflict in the continent.

Montet’s discovery on the eve of the Second World War was that of a tomb of a previously little known pharaoh of the 21 st Dynasty of ancient Egypt by the name of Psusennes I. This pharaoh was the third ruler of his dynasty, which came to power at the beginning of the Third Intermediate Period, a period of instability in Egypt. During the early part of the Third Intermediate Period, Egypt’s kingship was fractured, and the country was divided between Upper and Lower Egypt. Whilst the pharaohs of the 21 st Dynasty ruled from Tanis, their power was really limited to the delta of Lower Egypt. Upper Egypt, on the other hand, was the domain of the High Priest of Amun, who was based in Thebes. 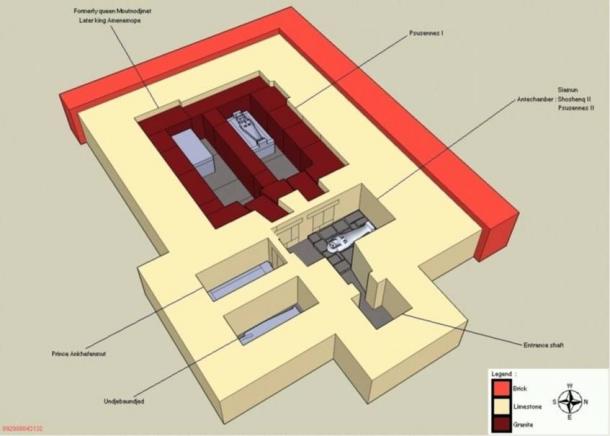 Restored view of the tomb from the royal necropolis at Tanis with the tombs of Psusennes I (21st d.), his wife Mutnodjmet, their son Amenemope, another son Ankhefenmut, the general Undjebundjed, and in the antechamber the sarcophagus of Shoshenq II ( Wikimedia Commons )

With the country weakened, it is only logical to expect that the pharaohs of the 21 st Dynasty did not wield much power. The discovery of the tomb of Psusennes, however, disproved this assumption. The most amazing find in Psusennes’ tomb was undoubtedly his coffin of solid silver. Hence, Psusennes has been dubbed as the ‘Silver Pharaoh’.

For the ancient Egyptians, gold was regarded as the flesh of the gods, while silver was thought to be their bones. Unlike gold, however, silver was not readily available in Egypt, and had to be imported from abroad, perhaps from Western Asia and the Mediterranean. This meant that silver was a commodity of even greater value than gold. Thus, Psusennes’ silver coffin reflected the wealth that he commanded. In addition, the metal objects in the tomb, including the silver coffin, are of an extremely high quality, indicating that Psusennes also commanded the manpower needed to produce such luxurious items. 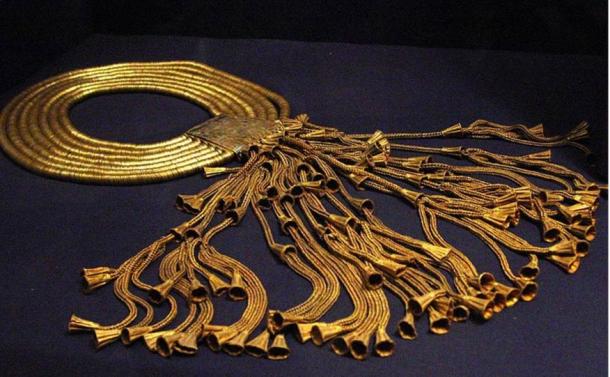 A gold and lapis lazuli collar of king Psusennes I originally found in his tomb at Tanis. ( Wikimedia Commons )

Psusennes’ silver anthropoid coffin was found within a pink granite coffin, which in turn was encased in a granite sarcophagus. Interestingly, the granite sarcophagus once belonged to a 19 th Dynasty pharaoh, Merenptah, who was the successor of Ramesses II. The mummy of Psusennes itself has not survived the ages, and instead of an intact body, Montet only found a pile of bones, black dust, and various funerary items, including a gold mummy board and a spectacular solid gold mask which would have covered the pharaoh’s face. 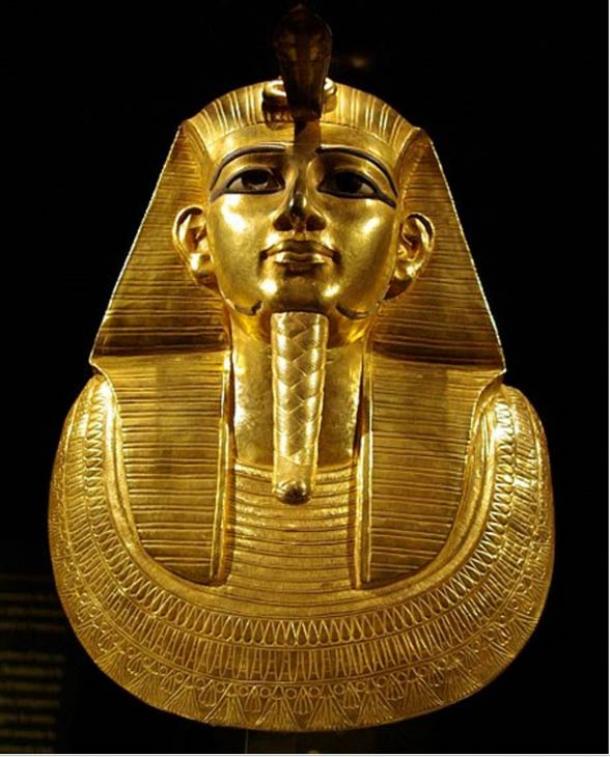 The lack of preservation is unsurprising, given the environment that Psusennes was buried in. Unlike the arid, desert like environment of the Valley of the Kings in Luxor, much of Lower Egypt consisted of humid, swampy land. Tanis was certainly no exception to this rule. As a result, the mummy of Psusennes would have been destroyed by the water seeping through the ground. In addition, most of the wooden objects have also been destroyed over time. Nevertheless, Montet found Psusennes’ canopic jars, shabtis, and other non-perishable goods around the pharaoh’s sarcophagus. These objects, in addition to the precious objects inside the sarcophagus, is said to rival the treasure of Tuthankhamun himself.

The wealth and power of Psusennes may be attributed to his remarkably long reign, recorded by Manetho to be either 41 or 46 years. Some Egyptologists even suggest that Psusennes reigned for 51 years. Given that Psusennes reigned during a period of political instability, the length of his reign is indeed impressive. Therefore, considering this fact, and the wealth of objects in Psusennes’ tomb, it seems that the situation of Egypt in the Third Intermediate Period, at least during the reign of Psusennes I ought to be reconsidered.

Featured image: The silver coffin of Psusennes I. ( Wikimedia Commons ).

Amenhotep II: The life and death of the great pharaoh