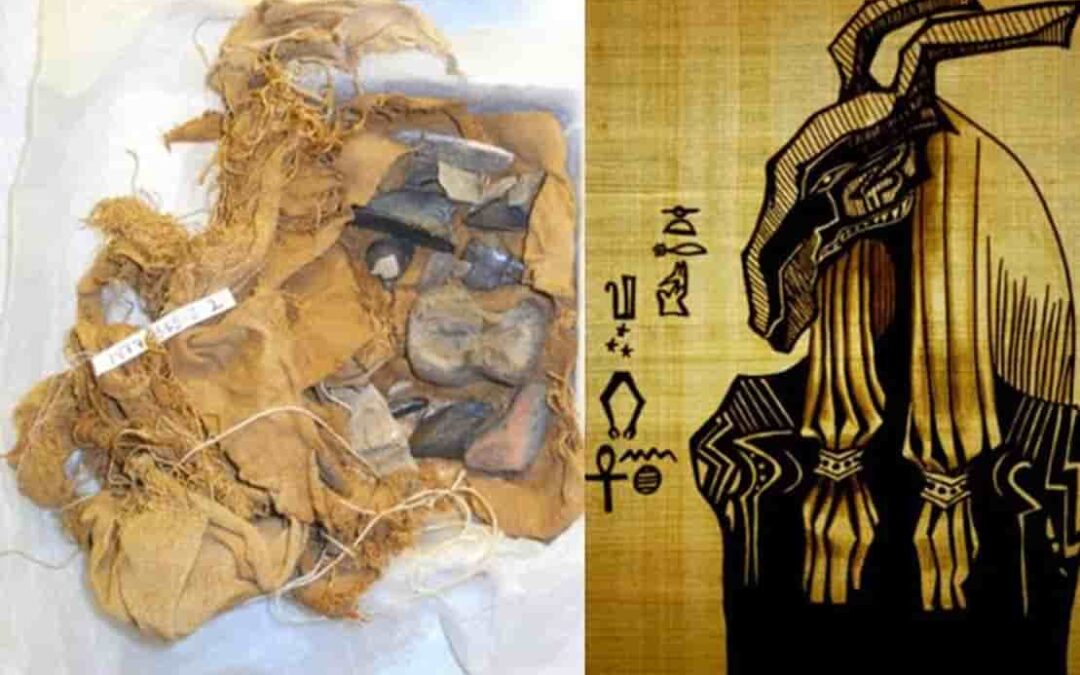 An investigation studies the boxes forgotten for years with fossils of animals that the ancient Egyptians venerated.

Ancient Egyptians collected fossils of extinct animals that they worshiped as sacred relics of Set, god of darkness and chaos, and placed, wrapped in linen, in tombs.

From 1300 to 1200 BC, about three tons of heavy black fossils, polished by sand from rivers, were taken to sanctuaries on the Nile, according to Adrienne Mayor, a historian at Stanford University.

The ancient Egyptians, after all, hadn’t put these bones on display. Instead, they’d taken them to a rock-cut tomb near a town called Qau el-Kebir. There, they’d given the massive, prehistoric bones the sort of dignified burial fit for royalty. They’d wrapped them up in fine linens and placed them in the tomb, buried with ivory tools to help them through the afterlife.

Whatever it was they thought they’d found, they believed it was something worthy of their respect. The tombs of Qau el-Kebir weren’t just makeshift graves thrown together for the occasion; they were the ancient resting places of powerful Egyptian lords, built 1,500 years before the fossils were found.

It was a place for the revered ancient dead; a place fit for the bones of a creature that, 2 million years ago, had terrorized the land that would become Egypt.

We still have no idea where the Egyptians found them. In 1926, shortly after they were uncovered, a geologist named K. S. Sandford combed every spot with 500 miles ( km) of Qau trying to track them down without success. To this day, nobody’s been able to figure it out for sure.

All we know is that they were moved. There were more than three tons of them and they had been dragged across miles of wild country, just to bury them again. It would have taken an incredible amount of effort to move those bones, and a whole team of people must have been involved.

Their destination, Qau el-Kebir, was no ordinary town. It was the center of a cult dedicated to the god Set, god of darkness, storms, and confusion. He was the lord of the black land; a monstrous, evil force who was often drawn looking like a monster with a hippopotamus’s head.

Without question, the bones were taken there on purpose. Whatever the Egyptians believed they’d found, they thought they belonged to the god of Chaos, and they were willing to do anything to bring them to him.

In 1922, archaeologists Guy Brunton and Flinders Petrie, discovered tons of black fossil bones piled up in the sanctuaries of Qau el-Kebir and Matmar. The discovery of these fossils was evidence that the ancient Egyptians venerated them as sacred relics of Set, according to the author of ” The Secret of the Amphorae.”

This ancient Egyptian deity was often associated with the hippopotamus, hence many of the fossils belonged to these animals, but remains of extinct crocodiles, wild boars, horses, giant antelope and buffalo were also found.

Four years later, the geologist KS Sandford explored 500 miles around the Qau sanctuary in search of the origin of “this strange collection of animals”, although without success. The fossils “appear to be from the Pliocene-Pleistocene era,” says Mayor.

The studies continued and in 1927, the archaeologist Guy Brunton wrote that the tons of fossils would be “the object of a special memory.” He promised in 1930 a book dedicated to these fossils, but that was the last that was known about the black bones of Set.

The fossils were forgotten by the scientific community until in 1998, Adrienne Mayor contacted paleontologist Andrew Currant, curator of Quaternary Mammals at the Museum of Natural History, from London, to find out if there were records of the fossils discovered by Brunton and Petrie.

A large “undocumented collection” of fossils from Qau had been stored in a warehouse at Wandsworth, Currant replied. They still remained in the original boxes that Brunton and Petrie shipped from Egypt. ”

The fossils collected by the ancient Egyptians more than 3,000 years ago languish in unopened boxes in London since 1920, ” denounced the Stanford historian, who considered that they deserved a scientific study by paleontologists and Egyptologists.

This is what he remarked in his book ” The First Fossil Hunters ” (2000), where Mayor described some Qau fossils discovered by archaeologist David Reese in 1999 wrapped in linen.

Reese tried in vain to convince the National History Museum to open their fossil boxes and learned that a collection of ancient Egyptian textiles from the Petrie Museum had passed into the hands of the Bolton Museum in Manchester.

The labels written by Petrie to identify the provenance of some of the textiles that had gone to the Bolton Museum confirmed that some of these textiles involved fossils discovered at Qau in 1923.

Egyptologist Tom Hardwick and geologist David Craven began an investigation at Bolton in 2007 to determine the identity of the bones.

They held a contest, with a prize for whoever guessed what type of fossil was inside each of the packages. The scaphoid of an extinct antelope or giant wildebeest was discovered, according to Mayor’s report.

Another box was examined with X-ray computed tomography in 2014 at the Bolton Museum and two years later the Egyptian Exploration Society awarded a grant to Pip Brewer (Museum of Natural History, London) and Diane Johnson (Open University) for finally examining the old, dusty boxes that Reese and Mayor located 16 years earlier.

“At last, it seems that modern scientific analysis will determine the origins, species and dates of the mysterious black bones of Set collected by the ancient Egyptians,” the Stanford historian was hopeful.

The Magnificent Step Pyramid of Djoser in Saqqara

In Mexico Ruins, a 1,600-year-old elongated skull with stone-encrusted teeth was discovered.

Archaeologists have discovered a civilization that predates the Egyptians.