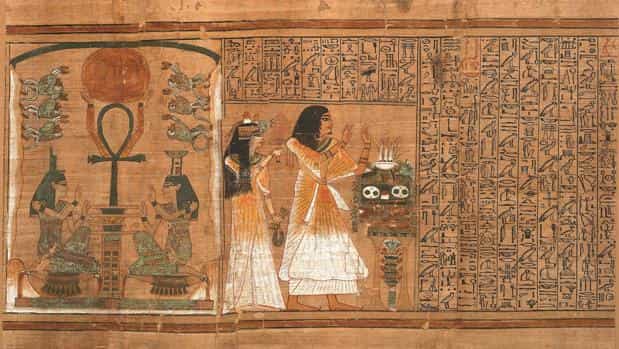 The Papyrus of Ani is one of the best-known versions of the Book of the Dead. It is believed that it was written about the nineteenth dynasty.

Among other things, its importance is because it contemplates the largest number of chapters among all the texts that have been found, explaining in detail the judgment of Osiris, a moment in which the soul of the deceased faces a judgment on the conduct of his past life.

The ancient Egyptians had a lot of respect for death. They cared more about the afterlife than the present one. For this reason, those who could afford it, as it was very expensive, did not hesitate to purchase their own Book of the Dead.

Taking this into account, we can affirm that Ani was someone of great relevance. In the text, it is already said that he was a scribe, and the truth is that the scribes enjoyed an excellent social position at that time.

All this makes us see that he was of a high rank and that his position allowed him to pay for such a complex and elaborate book.

Egyptologists believe that the book was written by three different scribes. This is because three very different spellings can be identified, although it is true that they are from the same school and that one of them stands out above the other two.

On this occasion, the text was adapted to the images, as can be seen in the changes of signs, repetition of chapters, and omission of others. This was unusual for this type of book.

The book itself is nothing more than a perfect manual of the steps that the ka of the deceased must follow in the Duat. A Guide to the Perils of the Path to Judgment with Osiris. Thus, this book would have been called the book of eternal awakening.

Although approximately twenty-five thousand different copies of the Book of the Dead have been found, this papyrus of Ani is, without a doubt, one of the best-preserved copies. Therefore, the book itself has been a great source of knowledge about the religiosity of the ancient Egyptians.

The “strange” find of the papyrus

Discovered in the tomb of Ani at Thebes (nineteenth dynasty ca. 1250 BC), it recounts the journey to the afterlife of this high official and royal scribe together with his wife, the priestess Tutu.

It was purchased by the controversial Ernest Wallis Budge (1857-1934). Given the “strange” circumstances by which the piece was taken, the authorities of the Antiquities Service surrounded the Egyptologist’s house to seize the pieces. But Budge did not flinch, and he evaded the pieces.

In order to more easily take out the papyrus from the country, he cut its more than twenty-three meters into thirty-seven fragments, which are the ones that can be seen today in the British Museum in London.

Leisure and entertainment in ancient Egypt

The Bent Pyramid of Sneferu: A Change in Design?

The Bent Pyramid of Sneferu: A Change in Design?

The chancellor in ancient Egypt: The rise and fall of an Egyptian office