During the New Kingdom (1570-1070 BC) the Giza plateau was a place that had lost some of its fabulous splendor. The pyramids of Khufu, Khafre and Menkaure were already about a thousand years old, the sand covered many of the buildings, the ruin took over others and in the vicinity wild animals abounded.

Some kings of the New Kingdom tried to restore shine to the area or felt a certain predilection. Prince Thutmose’s father, Amenhotep II, had erected during the first years of his reign a temple dedicated to the Great Sphinx.

It is not uncommon for the young prince to visit the construction often, he also liked to hunt and Giza was a good starting point.

On one of these hunting expeditions Prince Thutmose, while still a teenager, fell asleep in the shadow of the Great Sphinx. Then the young man had a dream in which the sphinx, as god Harmachis-Re-Atum, appeared to him promising that he would become king if he removed the sand that covered his body:

“The sand of the desert, now It covers me completely. I have been waiting for you to do what is in my heart, because I know very well that you are my son and protector ”.

As might be expected, the clean up operation was carried out promptly and the prince was indeed going to ascend to the throne as the fourth king by the name of Thutmose in the 18th Dynasty.

This story can be told thanks to the great stele that, as pharaoh, Thutmose IV (1419-1386 BC), raised between the legs of the Great Sphinx, in gratitude to Harmachis-Re-Atum.

Its inscription narrates the events and testifies to the devotion of the king. The document is known as the Dream Stele and is still preserved in the place where an Egyptian prince dreamed that he would become pharaoh.

The Dream Stela is a large slab of pink granite from Aswan (height: 360 cm; width: 218 cm; thickness: 70cm), with inscriptions and on the top there are representations of the king offering libations to the Great Sphinx.

The stela itself indicates that it was placed in its place during the first year of the reign of Thutmose IV, approx, 1419 BC.

In addition to literary interest, the Dream Stele may have political interpretations. The text seems to be propaganda in favor of the new king, so the legitimacy of the succession between Amenhotep II and Thutmose IV may not be entirely clear.

To this is added that it is the same sun god in the form of a Sphinx who intercedes for Thutmose to become pharaoh, showing a rise in the prominence of this divine entity to the detriment of Amun-Ra of Karnak and marking a very clear distance between the pharaoh and the almighty Theban clergy.

It is deducible that some of the foundations of the transformations that were to give rise to the Amarnian revolution and the supreme enhancement of Aten were already in the making.

The text of the Dream Stele reads like this:

“One of those days it came to pass that the King’s Son Thothmes came, coursing at the time of mid-day, and he rested in the shadow of this Great God. Sleep seized him at the hour when the sun was in its zenith, and he found the Majesty of this Revered God speaking with his own mouth, as a father speaks with his son, saying: ‘Behold thou me, my son, Thothmes. I am thy father, Hor-em-akhet-Kheperi-Ra-Atum; I will give to thee my Kingdom upon earth at the head of the living. Thou shalt wear the White Crown and the Red Crown upon the Throne of Geb, the Hereditary Prince. The land shall be thine, in its length and in its breath, that which the eye of the All-Lord shines upon. The food of the Two Lands shall be thine, the great tribute of all countries, the duration of a long period of years. My face is directed to you, my heart is to you; Thou shalt be to me the protector of my affairs, because I am ailing in all my limbs. The sands of the Sanctuary, upon which I am, have reached me; turn to me in order to do what I desire. I know that thou art my son, my protector; behold; I am with thee, I am thy leader.’

When he finished this speech, the King’s Son awoke, hearing this…, he understood the words of the God, and he put them in his heart. He said: ‘Come, let us hasten to our houses in the city; they shall protect the oblations for this God which we bring for him (or that we shall protect… and that we may bring): oxen… and all young vegetables; and we shall give praise to Wennefer… Khafra, the statue made for Atum-Hor-em-akhet…”

The rest of the text likely gave Thutmose’s response and an affirmation of the works carried out. 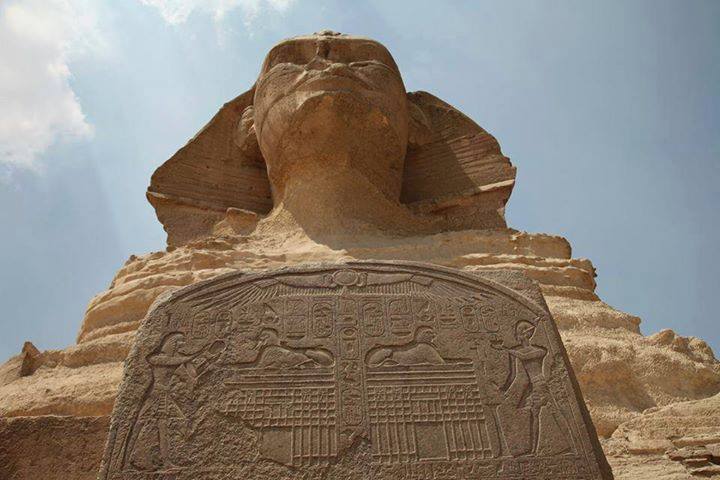 In the permafrost, Ancient Mummies of an Unknown Arctic Civilization were discovered.

Meritaten, Daughter of Akhenaten and Nefertiti

Ancient Egypt: A tomb with 18 doors

Ancient Egypt: A Decorated Tomb And Anthropomorphic Coffins With Mummies

The origin of the ancient Egyptian calendar

Amenhotep II: The life and death of the great pharaoh