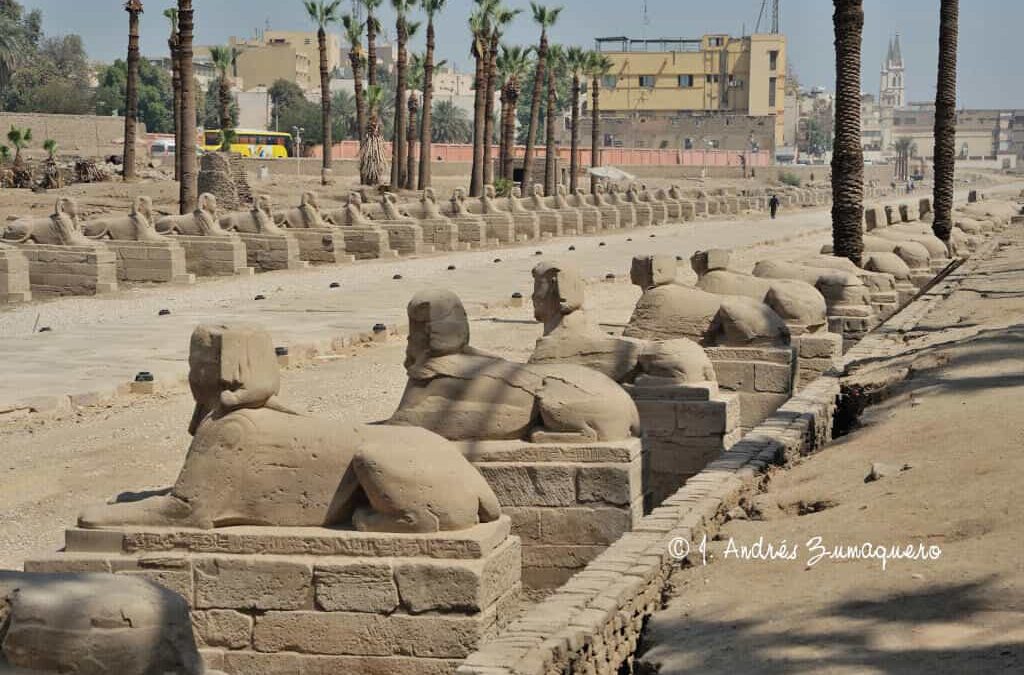 Sphinx (from the Greek word, Σφίγξ) is the Hellenized name of a fabulous being that is usually represented as a reclining lion with a human head.

Sphinxes were devised by the ancient Egyptians and formed part of their complex mythology. Some sphinx sculptures were built in front of a temple (avenue of sphinxes) based on the belief that they came to life at night to protect the temple.

The ancient Egyptians called it Sheps-ankh, which means “living image” or “living statue”; later, it derived to sefankhes (sephankhes) and then to sphinx.

The sphinxes were a symbol of royalty, as they represented the strength and power of the lion and life after death. This is why they appear in relief on many tombs. During the New Kingdom, some gods, such as Amun, were represented as sphinxes.

The largest and one of the oldest sculptural representations is the Great Sphinx found at Giza. In recent times, it was common to place sphinxes on both sides of the avenues leading to the temples.

Between the precincts of the temple of Amun in Karnak and that of Amun in Luxor, there is a processional avenue of several kilometers flanked by hundreds of sphinxes with the heads of rams or humans.

The Egyptian sphinx has been altered throughout history, changing its appearance according to the cultural trends of the moment. Some with a female appearance have been known, the sphinx of Hetepheres II being the oldest.

The Great Sphinx of Giza

In Giza lies the largest sphinx in the world, which is also one of the oldest. It has a height of twenty meters, and its Egyptian name means “the watcher”.

In the waters of the Nile

A sphinx from the temple of Ramses II is partially submerged in water. It was moved to avoid its destruction due to the heavy flooding of the Nile during the construction of the Aswan High Dam.

Sphinxes were considered symbols of royalty and represented life after death. In the temple of Luxor is a gigantic sphinx next to the obelisk, dedicated to the god Amun.

Sphinxes were usually depicted as a lion with a human head, although the head was sometimes that of a ram, as in this series of sphinxes from the Karnak Temple in Luxor.

Avenue of the sphinxes

The avenue of Sphinxes or The King’s Festivities Road is a 2.7 km long avenue that connects Karnak Temple with Luxor Temple with sphinxes, and ram-headed statues lined up on both flanks.

There is often detail of a chariot showing the King as a sphinx, crushing enemies underfoot.

The Alabaster Sphinx is wrongly attributed to Tutankhamun, although it was probably commissioned by Amenhotep II. In any case, it is so damaged by the passage of time that it is difficult to know its exact age.

Relive the incredible discovery of the tomb of Wahtye

Who destroyed the ancient Library of Alexandria?